Several years ago someone asked "whatever happened to the 'solder's memorial' or whatever it was called that used to sit in front of what is now the township building - the one pictured in the township history book?" A simple question that literally turned into a project.

A review of over 50 years of meeting minutes revealed only three vague references to the monument of "Roll of Honor" as it was correctly known. A search of aerial photos provided clues, but nothing concrete. Several longtime residents were interviewed. Many remembered the monument, but none knew what happened to it, why it happened, or when it happened. Residents Mr. & Mrs. Earl Renninger provided period pictures of the monument and Mrs. Renninger's father was in one of the pictures! 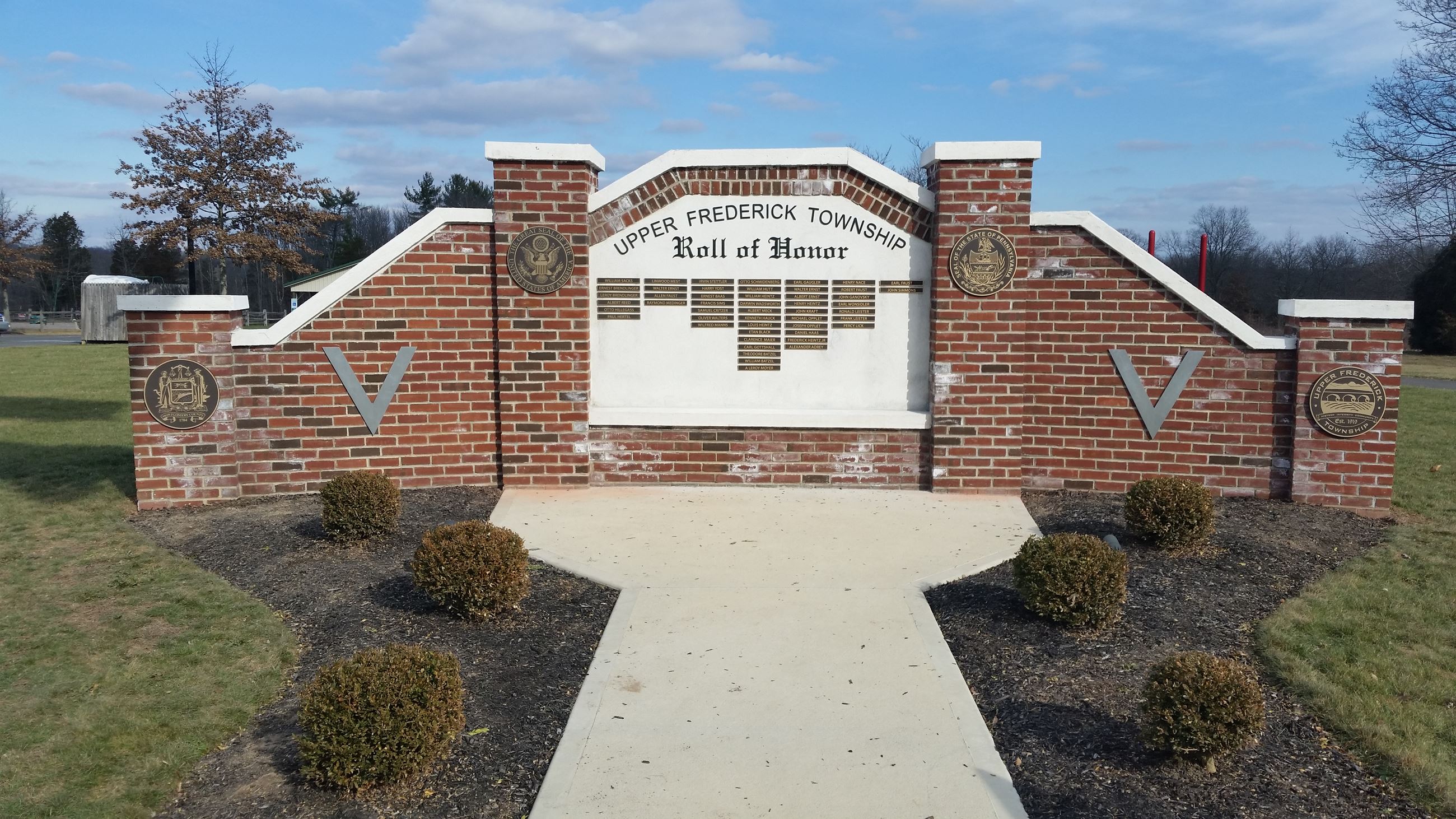 Once we had pictures of the monument, it was easy to see that it was a majestic brick structure called the "Roll of Honor". It listed three constituencies; "The Township" the "Lutheran" and "Reformed" congregations which together comprised the Keelor's Union Church. The two congregations shared the physical building on alternating Sundays. It appears as if there are 102 names on the Roll of Honor, each representing a man who was called to service during WWII. The original requirements for inclusion on the Roll of Honor are no longer obtainable, however given the fact that several of the gentlemen listed on the Roll of Honor are known to have survived the war, and in at least one case are still living would indicate that these are men who served, not necessarily perished.

Given the patriotic fervor that swept the nation as a result of the attack on Pearl Harbor in December of 1941, it is likely that the Roll of Honor was erected sometime in 1942 to honor those soldiers who had either begun volunteering or were drafted into service. It appears as if individual names were painted onto placards, and these were affixed to the background of the monument.

The first mention of the Roll of Honor in the offical meeting minutes came in the October of 1951 in the form of a motion to have the 'Honor Roll (as cited in the minutes) repainted. The total cost was $65.00. It appears as if a bid was awarded to the Bev-R-Lee Sign Company for the work, so we know that the monument existed at least until then. The next mention of the Roll of Honor is a November 9, 1956 reference to a letter received from the Secretary of the Joint Church Council. The letter voices concern over the condition of the 'Honor Roll'. The matter was referred to the township solicitor for instruction as the monument was neither owned by the township, nor located on township property. The property in question being directly across the street from the termination of Neiffer Road, in what is now the front yard of the township building. At the time, this parcel was still owned by St. Luke's Churce. At the December 13th, 1956 meeting, a motion was made to contribute ''1/3 the cost of rebuilding the destroyed Honor Roll" and a letter sent to the Church Council. There are no specifics mentioned concerning the type of destruction or disrepair. There are no further mentions of the Roll of Honor in the minutes until the subject was revisited in 2011, nor does it appear that the restoration project was ever undertaken.

Aerial photos dated 1950 show the Roll of Honor still standing, but its condition can't be assessed. The next available aerials from 1957 show no trace whatsoever of the monument, but do show a widened Route 73. Anecdotal evidence gathered from longtime residents indicates that the monument may have disappeared in either 1953 or 1954, having stood for perhaps only a decade.

A search of the minutes for the next 40 years revealed no additional mention of the monument. Examination of the pictures leads to the supposition that the central portion was made of wood. It is reasonable to believe that since pressure treated wood was not readily available in the period in question, that the wooden center of the memorial simply rotted. Strong winds from Hurricane Hazel which struck in October of 1954 may have been too much for the now weakened structure. It was also discovered that Route 73 was not only widened during this period, the roadbed. It is likely that with the monument is in a state of disrepair, and the state road widening project underway, that the monument was simply taken down and never rebuilt.

We are pleased to announce the monument was restored in 2013. The dedication ceremony took place on Veteran's Day 2013. This monument is dedicated to the bravery and sacrifices  made by those who defended the nation during the perilous days of World War II, but to also include those not necessarily by name, that served in other times of conflict such as the First World War, Korea, Vietnam, the Persian Gulf and ongoing operations in the Global War on Terror.

This monument is a recreation of one that stood along the intersection of Big and Neiffer Roads some 350 feet away from this spot. It was originally constructed to commemorate the brave people from our community who served our country during World War II. Time and weather took their toll on the monument, it fell into disrepair, and it was finally destroyed by a storm.

Township officials, residents, and community organizations reconstructed this monument in 2012 as it now stands, rededicated to all military personnel, first responders, and civil service personnel who have or will ever serve to keep our community and our country safe. 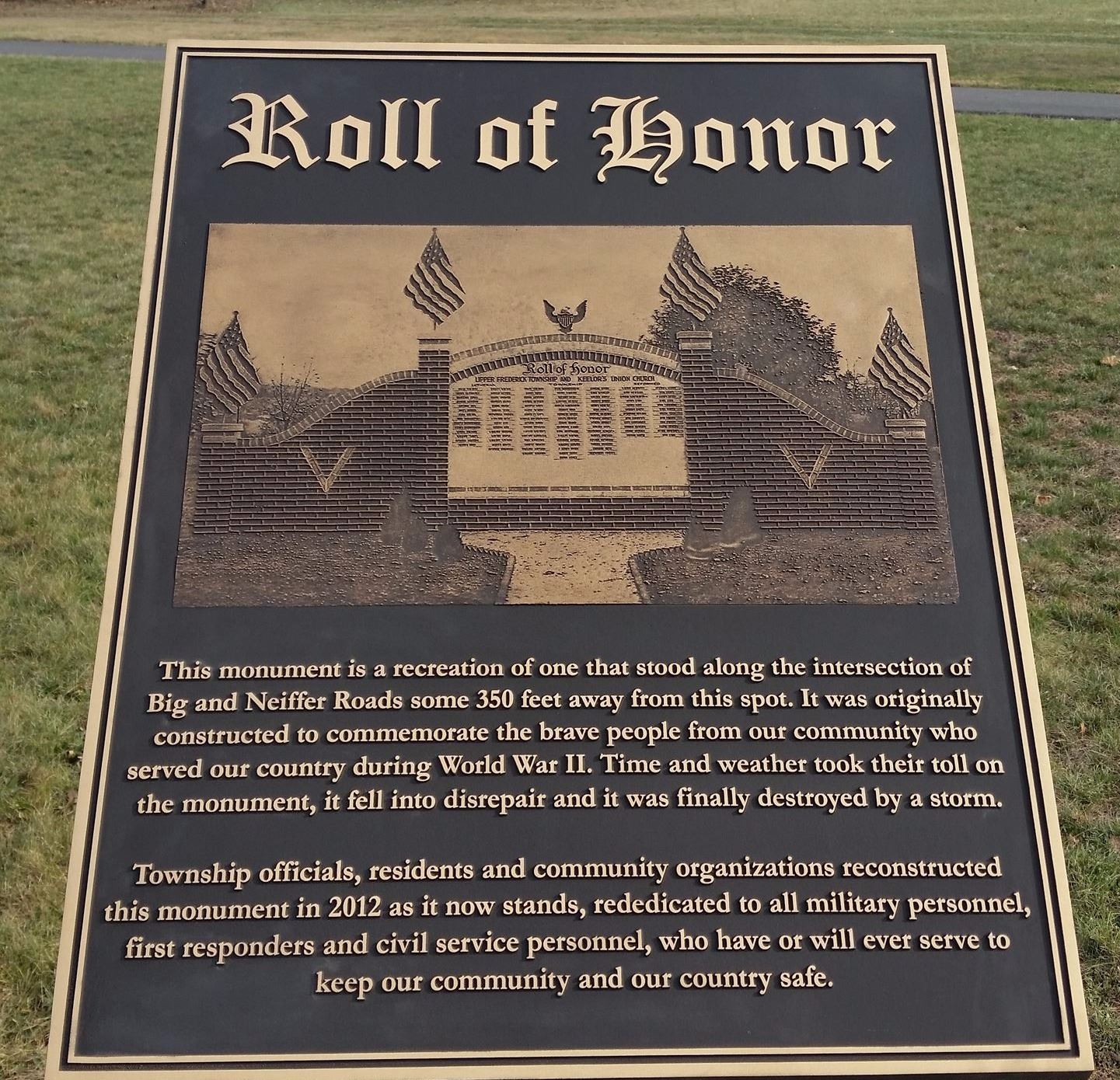